Terrell Owens, wide receiver in the NFL, whose extraordinary football skills and sensational athleticism have set the standard for NFL wide receivers, is among the league’s most exciting and electrifying players.

Born in Alexander City, Alabama, Terrell attended Benjamin Russell High School, where he excelled in several sports, including football, basketball, baseball and track.  After being recruited by the University of Tennessee at Chattanooga (UTC), he distinguished himself as an explosive receiver.  Terrell also lined up at forward on the UTC basketball team, including five starts for the squad that qualified for the NCAA tournament in 1995.  In his senior year, Terrell anchored the school’s 4×100 relay team. 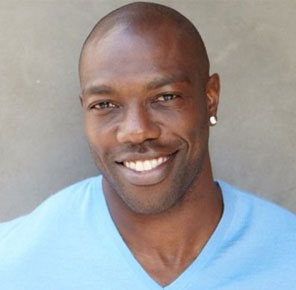 Terrell was drafted by the San Francisco 49ers in the third round of the 1996 NFL draft.  He played for the 49ers for eight years, amassing a highlight reel of spectacular plays and performances, including a game-winning touchdown against the Green Bay Packers; a record-breaking day on December 17, 2000, when he surpassed the 50-year-old mark for the single-game reception total; and his role in leading the 49ers to the second-greatest comeback in NFL playoff history, which occurred against the New York Giants in 2002.

In 2004 Terrell joined the Philadelphia Eagles, where he immediately had a major impact on the team’s fortunes.  Terrell averaged a touchdown catch per game and the Eagles won 13 out of their first 14 games on their way to Super Bowl XXXIX.  Despite a late-season injury that doctors said would take weeks to heal, Terrell started the game and had nine receptions and 122 yards in a loss to the New England Patriots.

After a controversial 2005 season with the Eagles, Terrell was released from his contract and signed a three-year deal with the Dallas Cowboys.  In his first season with the Cowboys, Terrell led the league in regular season touchdowns (13), despite a tendon injury to his finger.  While doctors recommended season-ending surgery, Terrell elected to wait until the end of the season to repair the damage.  In 2007, Terrell set a Dallas Cowboys record with 15 touchdown receptions and helped lead the team to the NFC East divisional title for the first time since 1988.  He had 69 catches for 1,052 yards and 10 touchdowns I his last season for Dallas.

Owens entered his 14th NFL season with the Buffalo Bills.  It was in this season that Terrell became the Sixth player in the NFL to record 1,000 career catches.

During his outstanding career, Terrell has amassed numerous awards and honors.  He has earned six Pro Bowl appearances and has been named a first-team All-Pro by the Associated Press five times.  Among his other accomplishments, Terrell was the second NFL player to record five seasons with 13 or more touchdowns, and he was the first to score a touchdown in seven straight “Monday Night Football” games. On September 15, 2008, in another amazing Monday Night game, Owens moved into second place on the NFL’s all-time career touchdown list.