Rashad Johnson is a safety for the Tennessee Titans, he was drafted in the 3rd round of the 2009 draft from The University of Alabama to the Arizona Cardinals where he spent his first seven NFL seasons.  Rashad had a record year in 2015 with five interceptions, leading the team.  He was also the 2014 team leader in interceptions, pick 6′s and tackles.  Johnson is known for his exceptional defensive coverage, speed, and hard hits. 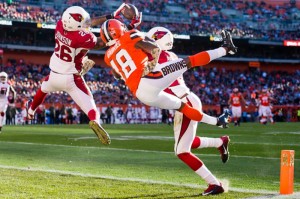 During his rookie season, Rashad was the only player drafted to crack the starting lineup.  He has had 10 interceptions in the last 33 games.

Johnson was originally a walk-on at The University of Alabama coming from Sulligent High School in Sulligent, AL.  Rashad ended up being a two-year starter at safety, a two-time team captain (only 8th player in school history to do so), and an Alabama legend.  Rashad started as a running back and made the switch to defense in 2005 after redshirting his first season.

Rashad is also very active in the community both in Sulligent and Phoenix.  His foundation, Walk-On to Champions Foundation, was established to provide courage, strength, and support to encourage youth to chase their dreams.  His goal is to show children that the road to being a champion can start anywhere.  He is dedicated to the mission that success will occur for youth that have positive role models, a commitment to their dreams, and perseverance to make it happen.