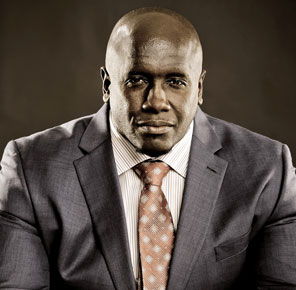 Nick was drafted in the 4th round of the 2003 NFL draft by the Denver Broncos from Clemson University.  He is currently a defensive tackle for the Arizona Cardinals in his 10th NFL season.  Since being drafted he has also played for the Cleveland Browns and Pittsburgh Steelers, where he won a Super Bowl.  Nick graduated from Clemson in 2001 with a degree in Sociology, he is currently working on finishing up his Master’s degree in Human Development.  Originally from Georgia, Nick graduated from Lyons High School in 1999 where his mother was also a teacher.

With the drive to achieve more goals after his eventual retirement, he is currently finishing his master’s degree in Human Development.  His long-term goal is to build his foundation, The Nick Eason Foundation, into a national organization, helping families across the country.  Nick enjoys spending time with his children and giving back to the community as much as possible, splitting his time between Georgia and Arizona.  You can learn more about Nick and his foundation at www.TheNickEasonFoundation.com .