Antoine Caldwell, entering his fifth NFL season, is currently an offensive lineman for the Buffalo Bills wearing jersey number 73.  Antoine was drafted in the 3rd round (77th pick overall) of the 2009 NFL draft by the Houston Texans after playing college football at The University of Alabama where he is considered one of the best centers in Alabama history. 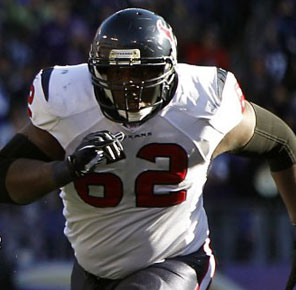 Caldwell played his first four NFL seasons with the Houston Texans.  Originally from Montgomery, Alabama, Antoine was a star on both the high school and collegiate levels racking up numerous awards and honors.   He was considered one of the best linemen in the country with agility, foot-speed, and the flexibility to play several positions.  During his tenure at Alabama, Caldwell was a 1st Team All-American during his senior year in 2008 along with being a finalist for the Rimington Trophy, which is given to the top center in the country.  Other accolades during his time at the Capstone include 1st Team All-SEC (both AP and coaches), twice named team captain (only 8 players in school history have done that), Most Inspiring Player Award, Mal Moore Leadership Award, and he was also selected to play in the Senior Bowl.  Caldwell did not only excel on the field, Antoine was also the first Alabama football player to earn his degree in human environmental sciences in under three years.  Antoine’s attitude, performance, and leadership are characteristics that have yet to be matched by any other athlete at the Capstone.

Antoine is a 2004 graduate of Lee High School in Montgomery where he was a 1st Team All-State selection, and was ranked as the 10th best player in the state.

Antoine continues to strive for excellence on and off the field.  He has recently started a foundation called “On the Offense for Youth” providing resources to underprivileged youth, helping young kids have what they need to succeed in life.  Meaning the most to Antoine are his family and friends along with living each day full of passion and living honesty.  Nothing great in this world was ever achieved without passion.  Roll Tide.